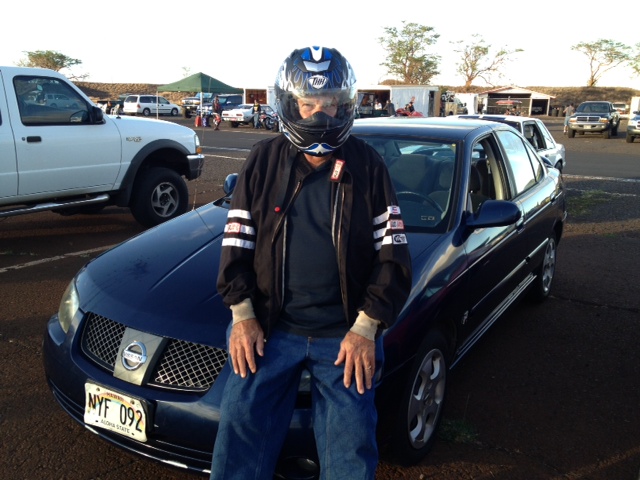 Thirty street class racers showed up to see what drag racing is all about. Most of the racers didn’t have a clue about the rules and strategies involved in drag racing. Dave Hunkins, the owner of Kihei Rent A Car, was one of the thirty. But Dave knew the rules. He knew the strategies too. He did 8 to 10 practice runs before the time trials. He took Marj along on some runs to help coach him on the timing and techniques involved. He was ready and he was HOT. Literally. Since you have to keep the windows up and the air conditioning off (you need all the power you can get) AND you have to wear a helmet and jacket, you get pretty heated inside the drag car. Which in this case was one of Kihei Rent A Car’s 2006 Nissan Sentras. The actual races didn’t start until after 9pm. But since the street class was single elimination those young guys were dropping like flies. Dave made it through round one, then round two, then round  three. Finally, at 12:30am, when most of us had been sleeping for 3 hours already, he started one hundredth of a second too early and “red lighted”.  Out of 30 guys (all under the age of 30) Dave came in 7th! WAY TO GO DAVE! You made us proud!